What comes between me and my Calvins* 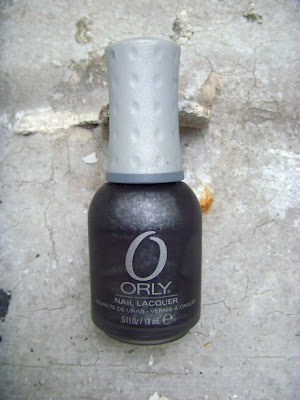 It’s the fag-end of April – or as TS Eliot used to call it, the cruellest month. Here in the Shoe Closet we share Tom’s seasonal ennui. We are sick to death of woolly tights and boots, but every time we unveil so much as a fingetip we risk losing it to frostbite.
In London on Saturday, the sun peeped out long enough for your Shoeblogger to throw caution to the (still biting) wind and make a run for Cheveux 2000 on the Uxbridge Road, and the first pedicure of the season. Mind, I am not so deluded as to the forecast to go for one of s/s2013’s trendy neons. For the moment I am rocking an old favourite, “Iron Butterfly” by Orly (the last bottle I bought in Moscow. Can’t find it in western Europe.) 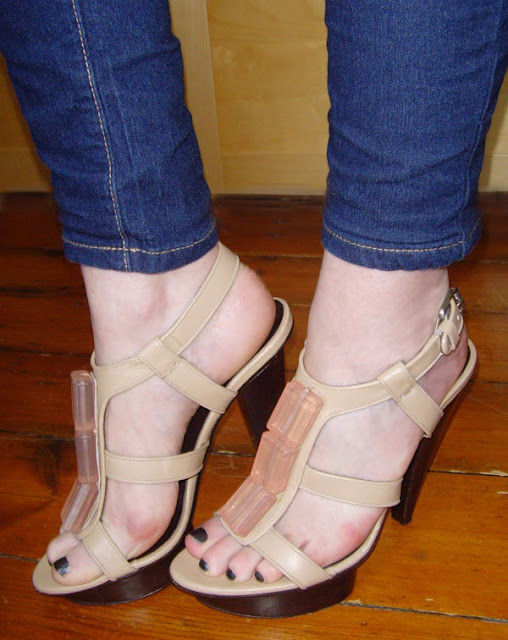 If anything is an excuse for new shoes, the first pedicure of spring has gotta be it. So here I am rocking it with a pair of particularly gorgeous Calvin Klein nude high-heel sandals. They have an underslung platform and 4-inch semi-conical heel covered in chocolate leather (scuff alert!) The T-strap has these cool shell-pink transparent pendants, a vague nod to Gatsby-fever. 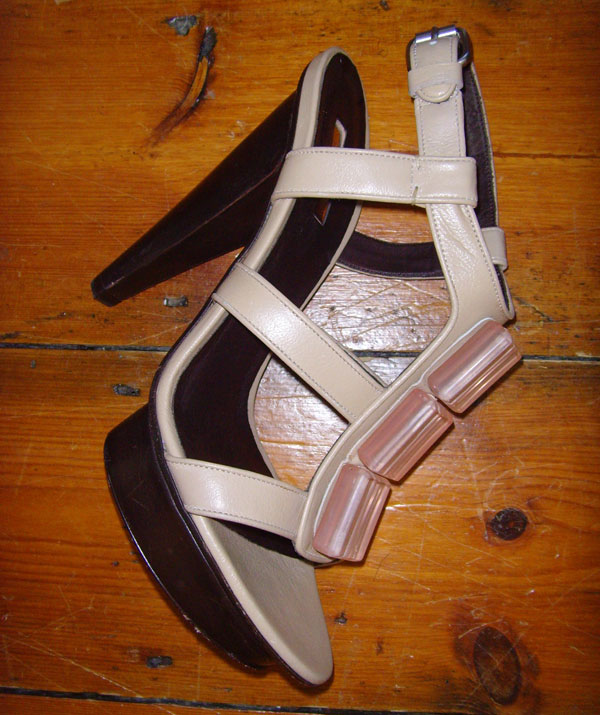 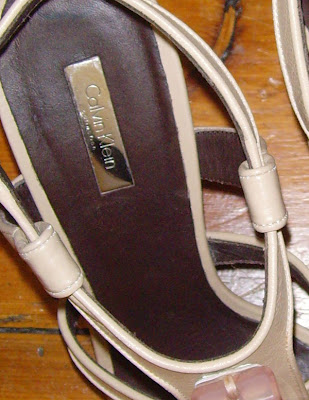 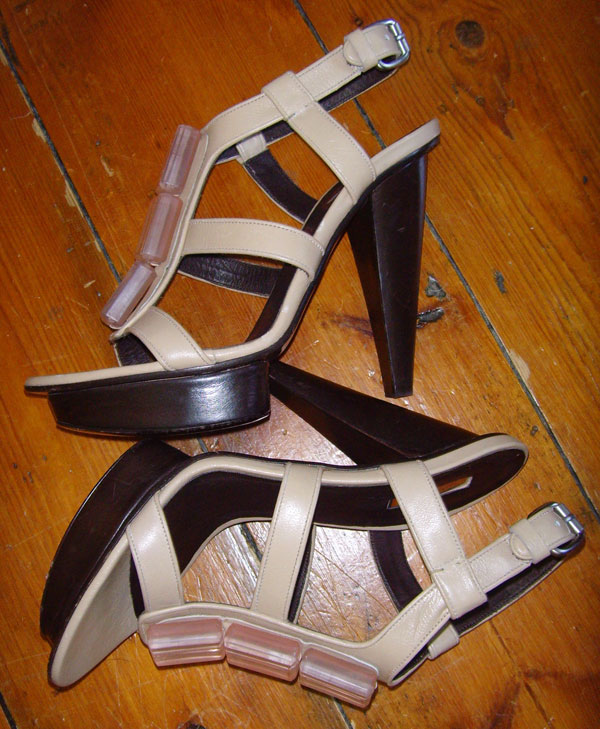 They make me very happy. I am determined to wear them outside my bedroom some day. (Some day when it gets, you know, warm.) 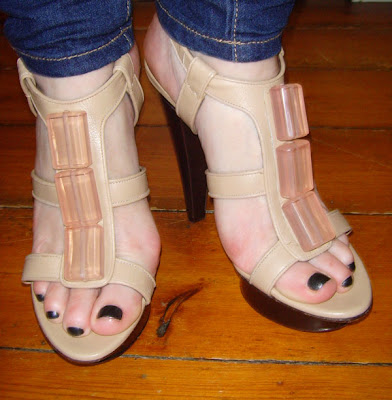 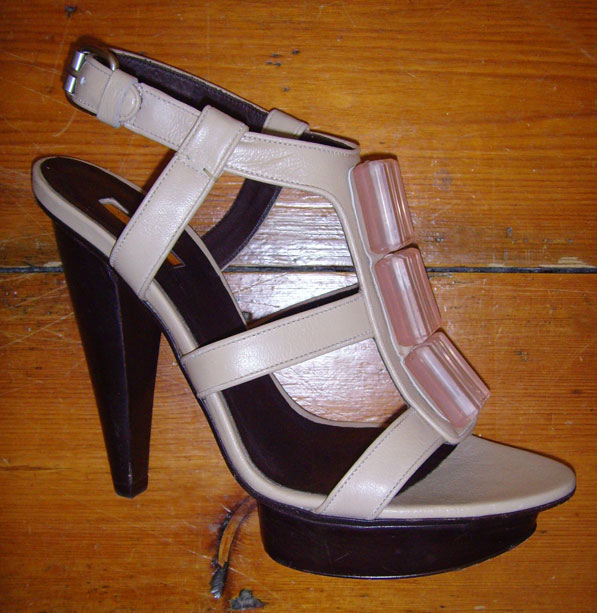 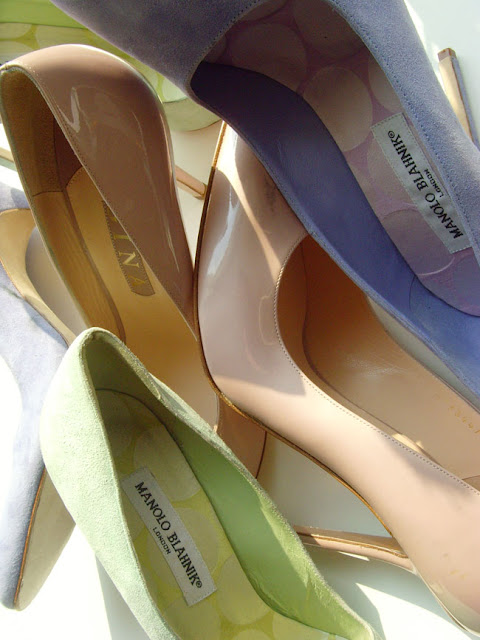 The Evening Standard has started using the phrase
“the NEW season” – NEW standing for Never Ending Winter – to describe March 2013 in London. It’s cold. It’s grey. It’s getting on our collective wick. Gatwick and Heathrow are expecting their busiest Easter in memory, with platoons of fed-up Brits making a break for some sunshine – any sunshine – over the Easter holiday. 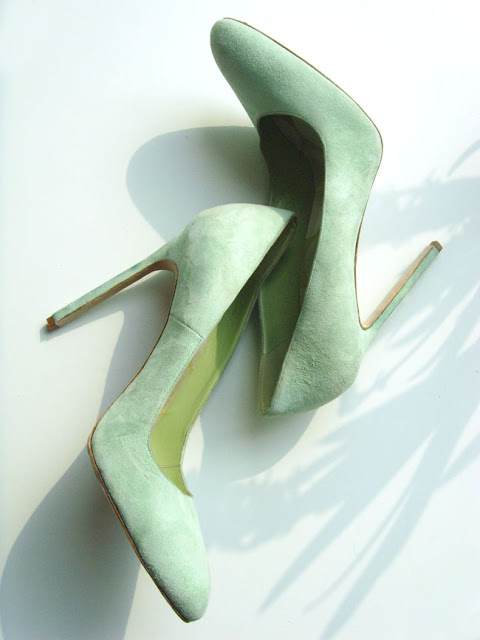 Those of us who can’t join the exodus have got to make the best of things here. There are signs of spring around, you just need to know where to look. Happily, the fashion cupboard around the corner from my desk is a good place to start. 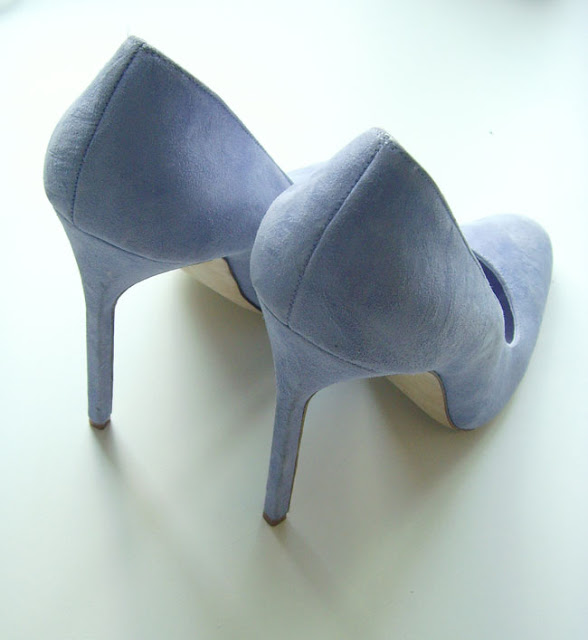 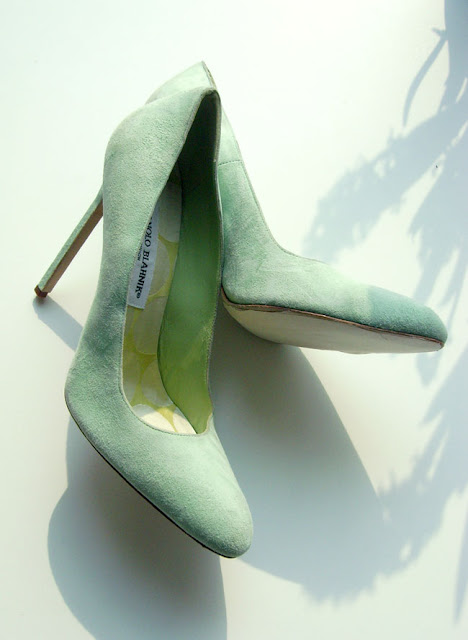 I had my own little pre-Easter treasure hunt this morning and pounced on these totally yummy pastel-toned heels (above). You can always count on Manolo Blahnik to put a spring in your step. These are lavender and pistachio suede, with a 4-inch (10.2cm) square spiky heel contrasted with a soft rounded toe. 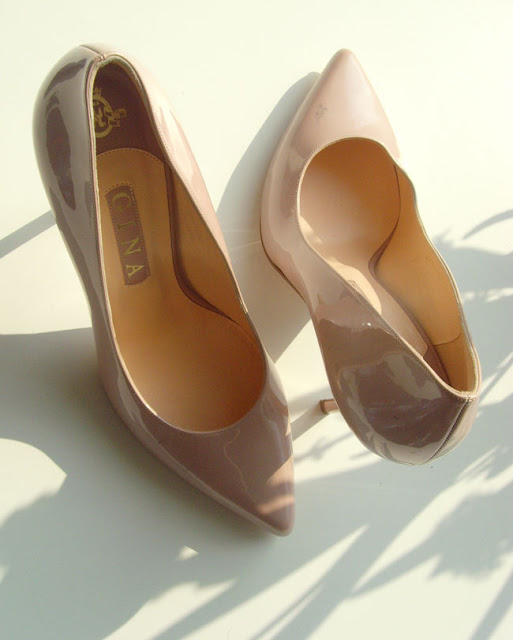 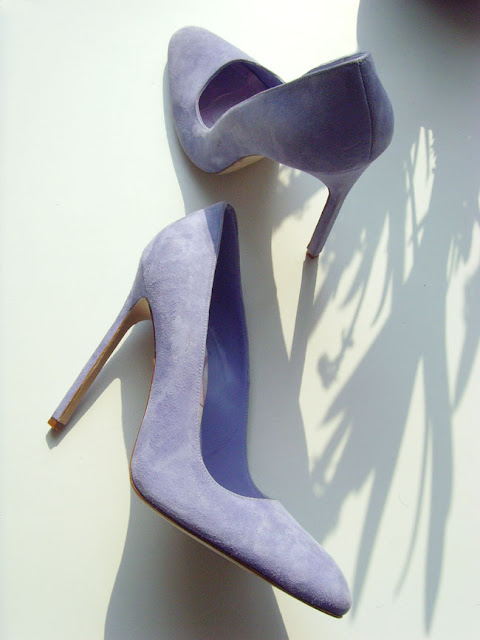 These caramel patent pumps (below) from Gina are absolutely mouth-watering. A classic shape, and another 4-inch heel, you just know these would look perfect with pretty much anything, pretty much anywhere. All we need now is for the temperature to rise enough to be able to wear them. 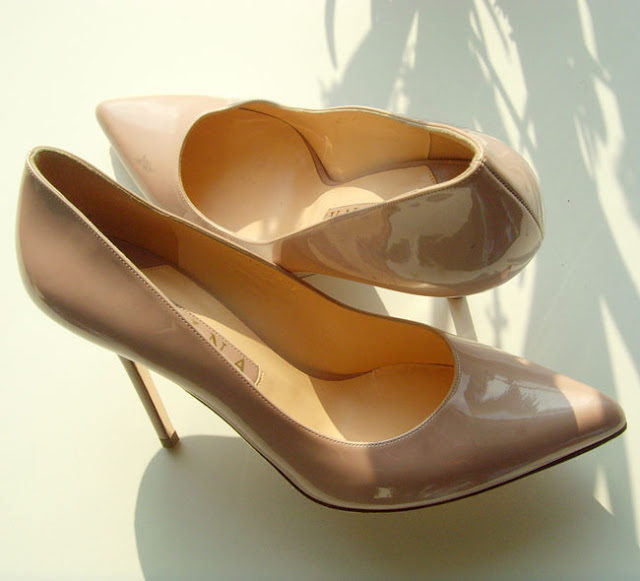 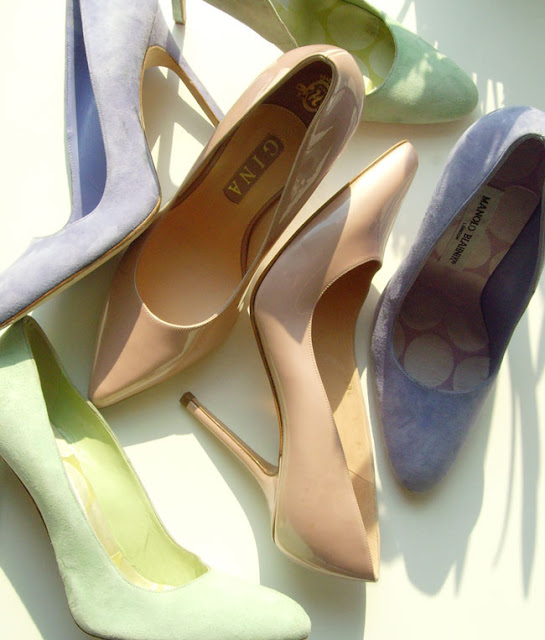 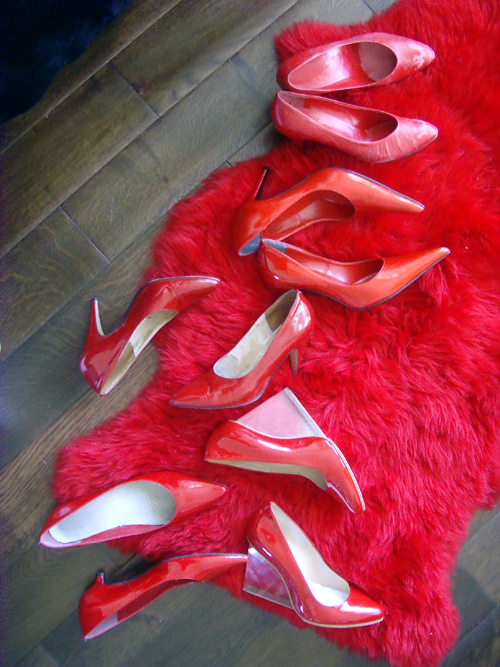 Many years ago my friend Louisa introduced me to the work of Cynthia Heimel, author of the brilliant Sex Tips for Girls and originator of the sage advice: “You only need three pairs of shoes – black boots, white sneakers, and red heels.” While I don’t necessarily think one has to stick to just three pairs, I do think that red shoes are indispensible. I have... let’s see... several. But hey, a person can always find room for one more. Especially when they are by Maison Martin Margiela for H&M and FIFTY PERCENT OFF. 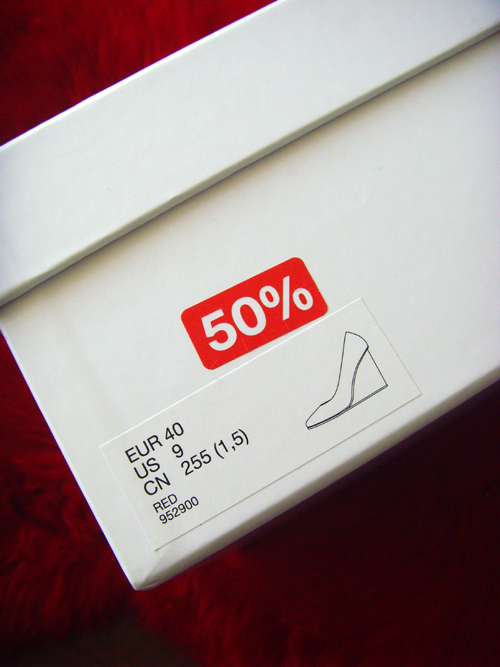 Let’s rewind a bit here, to Thursday November 15th when H&M’s latest high street designer collaboration hit stores worldwide with the usual media hype and fashion victim frenzy. This is the fifteenth designer pair-up H&M has done since launching the series with Karl Lagerfeld in November 2004. That one was groundbreaking, and felt genuinely exciting. I bought a black, white and red striped extra-long sweater, as much for the thrill of being part of shopping history as anything else (I know, I know...) The concept was exciting but the woolly was wildly unflattering and ended up in a charity shop. My second investment was a little black satin bomber jacket by Madonna in 2007 (Madge had an H&M moment! Who remembers?!) It was, in fact, a classic “piece,” nicely made, and I still wear it. 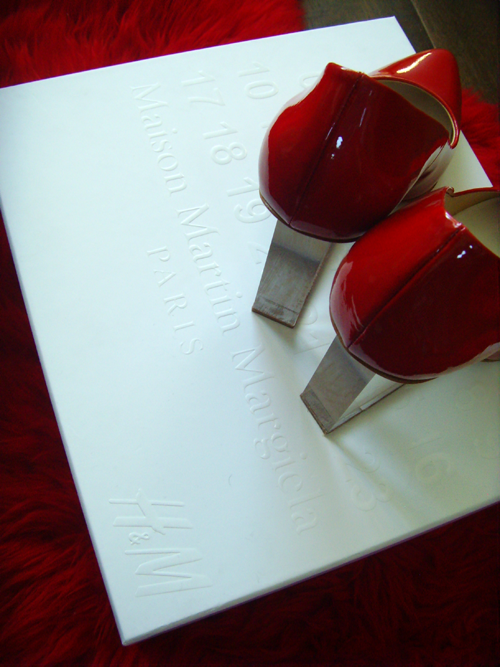 So to MMMxH&M. Well, I strolled over to Westfield on Thursday morning to feel the vibes. (No need to check out the clothes as they had already appeared in every fashion publication you could waggle a pelmet at.) About 9.45am there was a short queue and a young man handing out armbands for timed entrance to The Collection. “Your time is 12.15,” he said to me. WHAT??!! There were about eight people lined up and the shopping centre was deserted. Snorting, I stalked inside to buy a non-MMM burgundy jumper (as seen on Caroline Trentini, a snip at £14.99.) 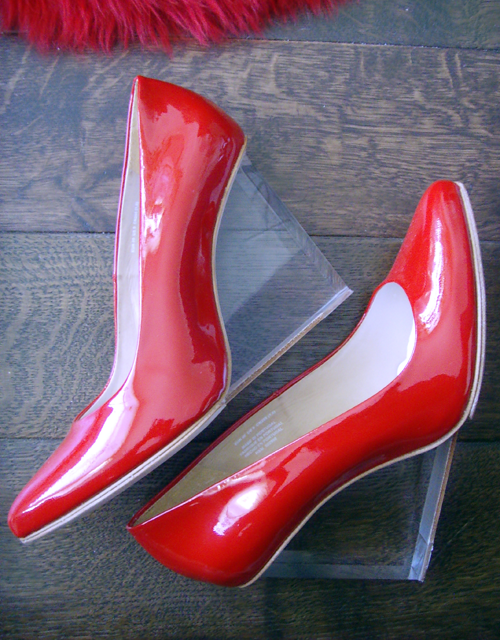 That was that. Until this Saturday afternoon, when a particularly grim London November afternoon drove me back to Westfield in search of warmth, brightness, and something Shoehorn could cook for dinner. En route to Waitrose I dropped in on H&M, where, to my surprise, they had A LOT of MMM stock leftover. And marked down by 50%. Including this pair of red patent pumps, with perspex heels. 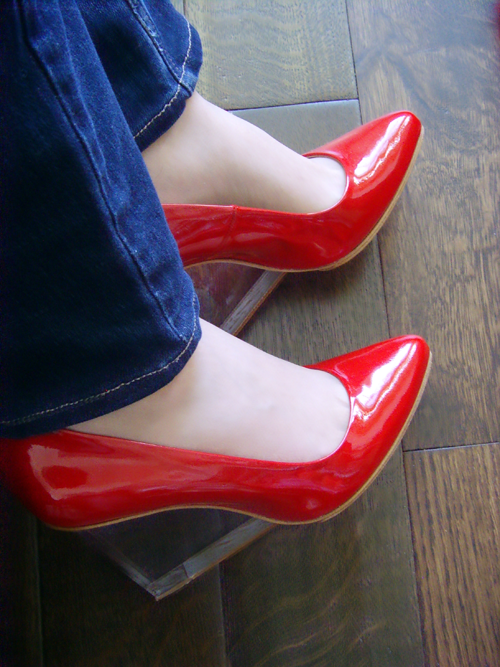 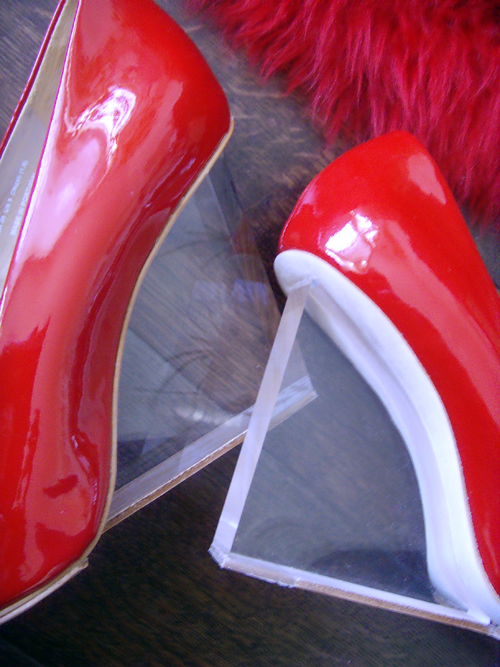 My first pair of red patent pumps (below) are by Pied à Terre, and I bought them when I was single. No wonder the lining is almost completely crumbled away (but they still fit like a pair of gloves and feel marvelous). 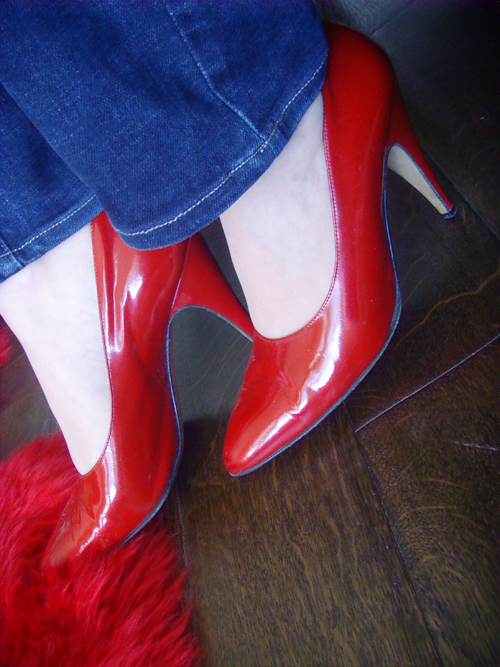 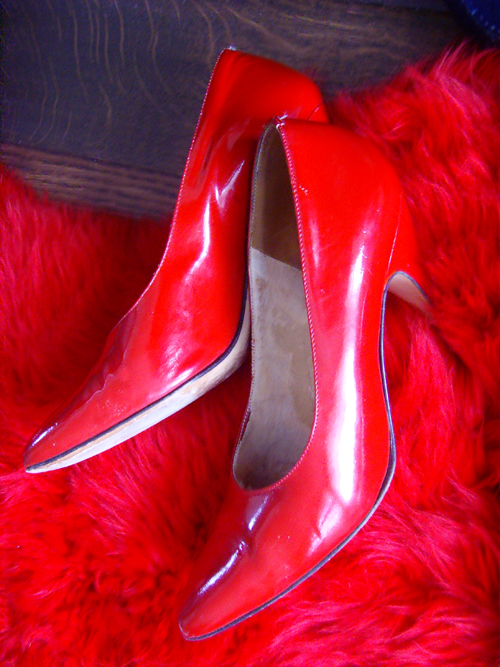 Then there are the lovely red patent kitten-heels (below) – I can’t actually tell anymore where these came from because the insoles have grafted to the insides... 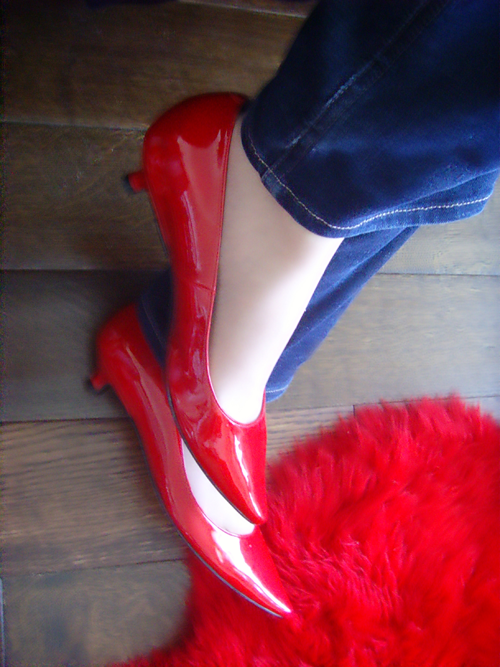 These (below) are my mother’s red leather pumps. Scuffed with age, but really good quality, I think the distressed patches add character, in a Footloose kinda way. 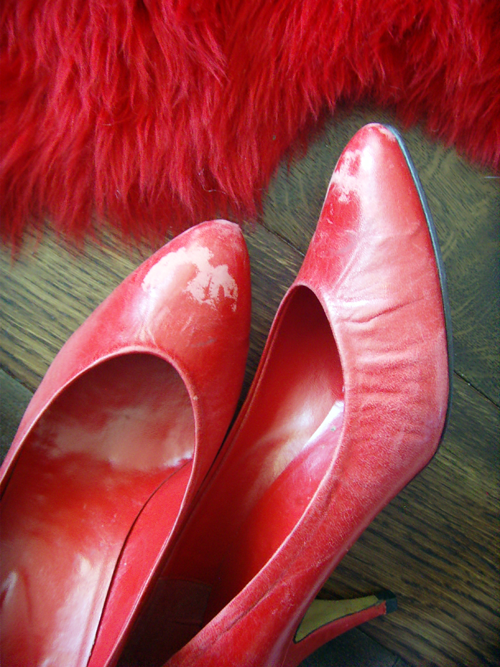 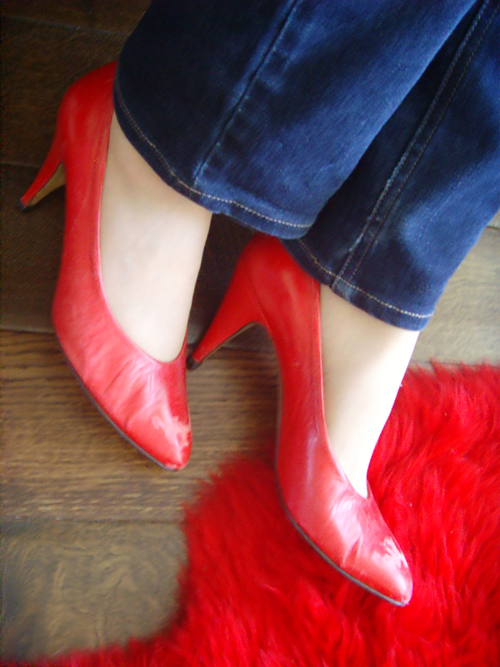 Last but far from least, my beloved Dorothy In Oz red sparkly patent stilettos (below), from Schuh. All together now, tap your heels: “There’s no place like...” 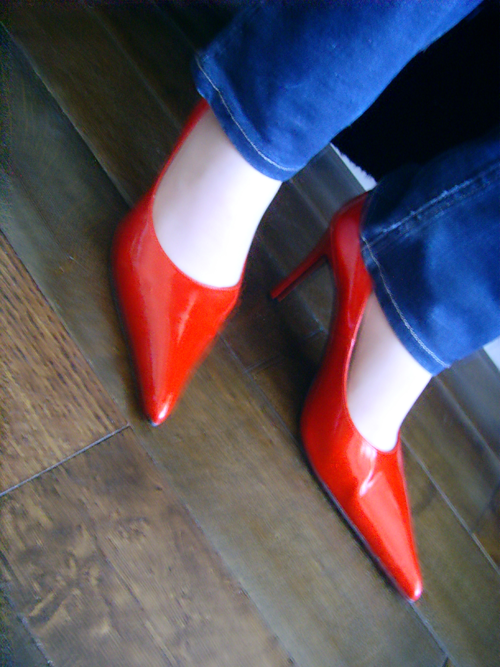 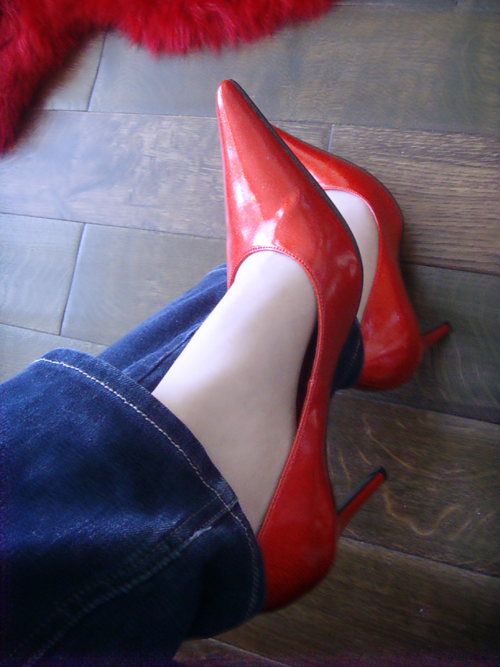 –(The Angels Wanna Wear My) Red Shoes, by Elvis Costello, released in 1977 but my favourite version is a cover by Hem from 2002. Check it out on Spotify.

It’s the last weekend in October and the daytime temperature in Mumbai is still in the mid thirties. In a few days your Shoeblogger will be returning to London, where, as well as exchanging light kurtas and cotton pants for coat, hat, gloves, scarf, etc, I shall also have to adjust to wearing shoes for the first time in four months.

One thing I realised when I arrived in India at the end of July was that street-style-blogging – at least about footwear – wasn’t going to work here.
I mean, it should. When it comes to costume, whether choosing Western dress, local designers, or traditional garb, Indian style is genuinely fabulous. (How come there is no Indian “Sari-torialist”?) That applies as much to the sari-clad women carrying basins of fish on their heads from Sassoon Docks at 6am as to any Bollywood starlet posing on the red carpet wearing Manish Arora.
However, what happens below the ankle is a different story. A lot of people do a lot of walking in this city, and the combination of heat, dirt, appalling road surfaces, and – what else? Oh, yes, poverty – means that fancy footwear is very low on the list of everyday priorities. The majority of my fellow Bombayites schlep around in some variation of a flip flop (the hawai chappal, according to Wikipedia, which literally translates from Hindi-Urdu as “air sandal”) or barefoot.

In the last few months I’ve invested in several pairs of traditional Indian shoes (strictly in the interests of research and supporting the local economy.) Some of them will probably never make it onto my feet, as they are genuine pieces of art, like these cream and tan leather slippers with the red and gold trim and crimson applique insoles. I bought them at the shoe market (yes!) on Linking Road in Bandra.

Ditto these leather “snake eyes” slippers, below, also a Linking Road acquisition. They are hand-tooled two-tone leather, beautifully stitched, with little metal studs and tiny red pompoms for adornment. I am sure even Monsieur Louboutin would applaud the cobbler who painted the red soles.

The plaited leather moccasins below might not at first sight look that impressive (I shot this post on the stairs and in the corridors outside my apartment, which is not a bad reflection of the city, in terms of decay and general scruffiness.)

However, they were hand-stained for me, as shown above, and are really lovely pieces of craft. Plus I saw a cool girl in the cool Woodside Inn sporting a pair with neat jeans and a beautiful white shirt the other evening, and believe me it is ALL in the attitude.

Rather more elegant are the light fawn chappals below.

I’ll vouch for the hard leather, which is why I haven’t actually worn the Kholapuris yet, but I aim to, next summer. The dark leather chappals below, on the other hand,  I bought on Colaba Causeway (tourist trap, but hey) a week after arriving and have worn every single day since.

They have survived drowning in the monsoon, getting dumped with piles of strangers’ shoes outside temples, air-conditioned days in the office, sweltering nights in Worli bars – and getting pooped on by birds, at least twice. Yesterday someone on the street offered to clean them for me, for two rupees, which I reckon was because I’d just had a spa pedicure and my feet were in seventh heaven and looked it (Anand at Juice in Colaba, 2215 1108 – your tootsies will worship him). Or it could be a random acknowledgment of the superiority of these humble thongs.
Whatever, they are mad comfortable, and I love them. Switching them out for boots next week is gonna be a wrench.

Posted by ShoeFoo at Sunday, October 28, 2012 No comments:
Email ThisBlogThis!Share to TwitterShare to FacebookShare to Pinterest
Older Posts Home
Subscribe to: Posts (Atom)

Other stuff i do